‘EFT’ is short for Emotional Freedom Technique (that’s a pretty good name for it, isn’t it). It is perhaps the most widely used Energy Psychology strategy in the world today. It is simple to do and learn and can help with many kinds of negative feelings, such as: stress, fear, depression, anxiety and even some types of pain. It can also be used to work through some emotional blockages, for example to improve ones self confidence or achieve personal growth.

‘EFT’ is a technique which has developed overtime since the 1990’s. It is based on the body’s meridian system as known in acupuncture. The early origins of this strategy began with a psychologist who was working in Northern California. Dissatisfied with the progress of one of his patients, he turned to the acupuncture books and discovered a way to tap and massage certain points on the body while repeating a special series of words and phrases. 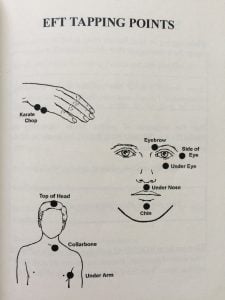 Extracted from ‘Attracting Abundance with EFT’ by Carol Look

The image to our left shows the various spots on the body that are included in the tapping sequence.

The often rapid changes in state seem unbelievable to psychologists and therapists who were used to strategies taking much longer to affect change.

The method has gained much more widespread acceptance and in fact, more and more research is being gathered to show the scientific evidence of its effectiveness.

EFT is one of the many varieties of energy psychology strategies.

To learn more about them and to look at the research or to find resources, click these sources below:

Written by: Gail Weissert, LCSW – gweissert.com. Gail is a psychotherapist on the Eastern Shore of Maryland who uses this technique in her practice frequently.

About the Author: Lindsey

Lindsey is the author of A Life Well-Balanced, a lifestyle blog dedicated to helping people live a more balanced life - physically, emotionally, mentally and spiritually.

We use cookies and third-party services to ensure you receive the best experience on our site. If you continue to use this site we will assume that you are cool with our terms. Got It